On my last trip to one of the Müeller stores, I couldn’t help to check the toy department where they usually have some Revell kits on the shelves. Being a big Star Wars fan I’ve noticed the shiny little “pocket kit” series before but never cared to check what kind of kits were hiding in there. With the price of 10EUR I convinced myself that there is no gamble involved as it’s gonna probably become a desktop decoration beside my PC, based on my expectations of a toyish appearance. And oh boy was I wrong when I opened the box. 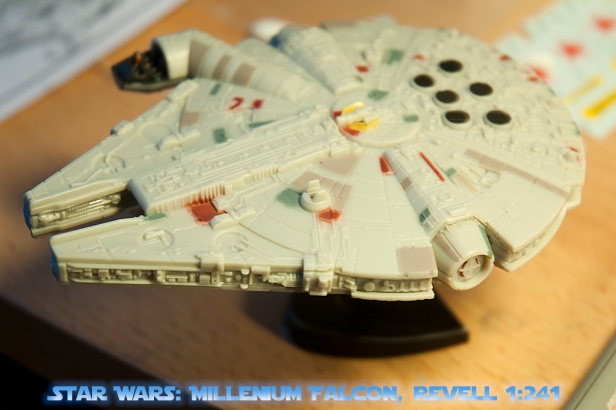 Shiny prepainted plastics and sloppy panel painting actually make it look like a toy and you can get to the stage seen in the above photos literally in less than half an hour, with sprue attachments sanding time included. Since the plan was set to make it more of a model and less of a toy, parts were glued together (forgot to mention it’s a snap-kit). The fit is really good all around and the only some parts needed some Force persuasion to eliminate some tiny gaps.

The exhaust area in the kit comes prepainted in electric blue colour and since I find that too bland and again “toyish looking” I’ve shaded the area with white and light blue to give it a more dynamic look. I have to admit I was toying with the idea of installing white LEDs but due to the way, this model is constructed I would have to scratchbuild the entire area including the framework – oh well, perhaps one day on Finemolds kit.

In this scale it’s hard to expect much of a cockpit but there are two blobs of plastic included that resemble the pilots and with a little bit of paint they now look like Chewbacca and Han Solo. Fact is that after canopy is installed, not much can be seen anyway. But they are there 😉

Having masked everything and sprayed the entire kit with Alclad Grey Primer all the lovely detailed I talked to you about before popped out.