Time to move on. Simple shape means fast building. Little clean up of the join lines and separated elevator and we’ve got ourselves a model ready for primer. 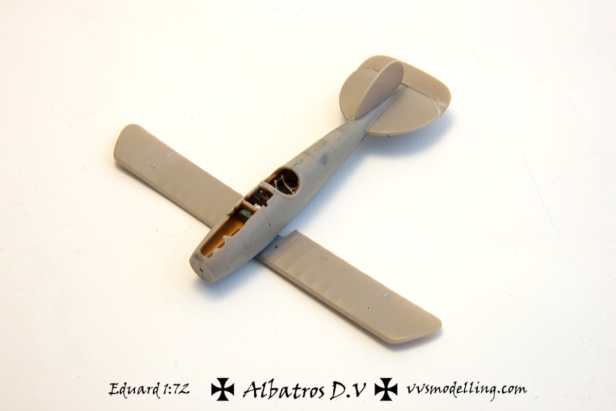 Engine is quite a simple affair, though as it’s mainly hidden, I think it’ll do the job quite fine.

Given that fuselage will be painted in bright colours, Alclad’s White primer was used; remember Red, Yellow and Orange colours prefer white undercoat.

As you can imagine, no, I don’t have purple paint in my paint stock. A few drops of red, a drop of blue and a drop of White and adjusting the quantities of these drops a bit and I got this purple colour. Is it correct for the so called Mauve paint? I don’t know, but asking this question on some WW1 forums will be like opening a can of worms. I might build my next biplane in black and white, as my friend suggested. 😉

And she’s done. There are some little touch-ups to be made, but she’ll receive a gloss coat tomorrow. 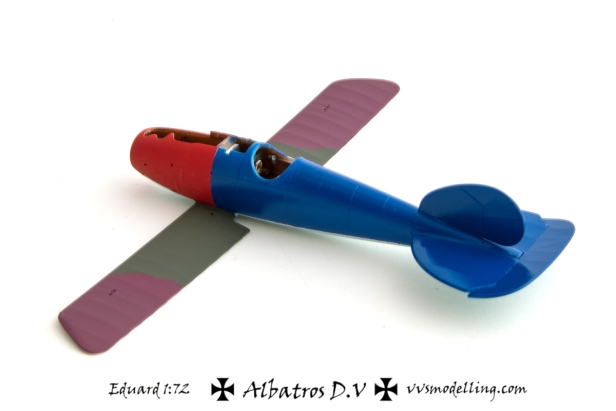 As Eduard screwed the pooch with decals (included are late war straight crosses instead of mid-war styled ones and there are photos of this particular aircraft available on the net), I now have to wait for the correct ones to arrive. Next update will include the applied decals and oil colours weathering.