Seinar Fleet Systems were one of three major starship suppliers to the Galactic Empire, specializing in construction of small and deadly TIE (Twin Ion Engine) starfighters. 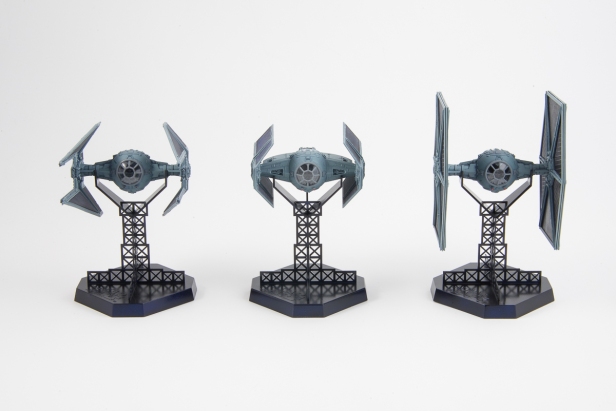 TIE Fighter, was the standard Imperial starfighter seen in massive numbers throughout most of the Galactic Civil War and onward.

TIE Interceptor, was a TIE Series starfighter used by the Galactic Empire. The TIE Interceptor was identifiable by its arrow-shaped solar collection panels, a distinct difference from the hexagonal solar arrays of its predecessor, the TIE Fighter. The Interceptor was one of the fastest starfighters in the galaxy at its prime.

The TIE Advanced x1, or TIE/x1 was an advanced prototype starfighter touted as a replacement for the standard TIE Fighter tested by Darth Vader and X1 at the battles of Yavin and Mustafar respectively. While it never made it into production, many of its best design features were later incorporated into the TIE/sa bomber and TIE/IN interceptor.

A&A models 1:72 Ilyushin Il-102 - in progress . While the turbine blades look convincing enough, I was less impressed by the intake itself. Composed of two halves, the plastic was too wide to fit around the curvature of the turbine. I ended up shaving away around 1mm of plastic on each mating surface to achieve a fit. However this worsens the seam itself which will have to be carefully puttied and sanded from the inside. A job I am not really looking forward. . . #scalemodelsworld #modelkitsinsta #instahobby #scalefreak #aviationenthusiast #aviationgeek #aviation #aviationart #aviationart #aviationartist #scalemodel #scalemodelling #scaleart #scalemodeller #scalemodellers #plasticart #plasticmodel #plasticmodels #plasticmodelkit #russia #sovietunion #sovietairforce #airforce #aamodels #1_72 #1_72scale #sturmovik #il102 #ilyushin