Mikoyan Gurevich designed a series of heavy fighter/interceptor prototypes in the mid-50’s, starting with a project called Ye-150 (E-150).

Ye-150 first flew in July 1960. Although of similar design to MiG-21, it was more than 3m longer and over 7 tons heavier than MiG-21F-13. Powered by a mighty Tumansky R-15 afterburning turbojet engine (better known as the MiG-25 engine), it achieved maximum speed of M2.65 at just using half a throttle, excellent rate of climb and service ceiling of almost 70.000ft.

The kit used for building this model is of Ukrainian company Modelsvit in 1:72 scale.

Multi-angled nose cone is built out of 4 parts. There are some rough edges when glueing the 4 pieces together but they are easily removed using sanding sticks. Nose mounted pitot tube will be replaced by a brass tube. 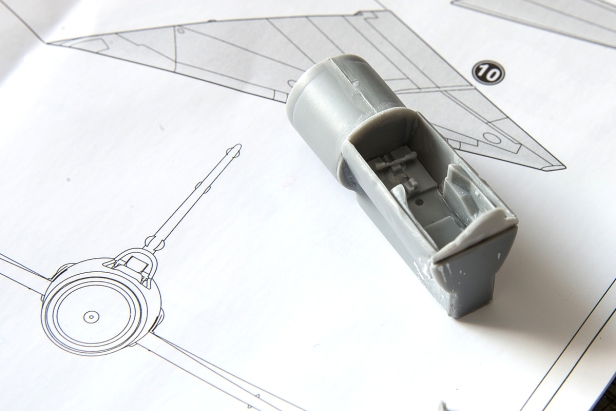 Multi-piece cockpit gives nice three-dimensional look of the pilot office and also serves as the front wheel well on the bottom and nose cone attachment point (and a place to install required nose weight).

Ejection seat and instrument panel are quite good for a short-run kit and after adding some harnesses and some paint should look quite presentable.

Wing halves have some flash present, but what I find most disturbing is surplus plastic, that can be seen on above photo attached to the flaps. Removing it is quite difficult and requires use of different sharp tools from my toolbox.

And last but not least, the exhaust area. When building the exhaust tube and dryfitting it into the fuselage halves, huge gaps appeared on top and bottom – approximately 2mm wide! I am still not sure how to solve this problem, as I am not entirely certain, enough material can be removed on the inside of the fuselage, while the exhaust tube is quite thin.