Hello everyone! Just 6 day after the last post, I bring you a new update. A bunch of little things were accomplished in the mean time and hopefully the step-by-step guide on painting the exhausts will be of help to somebody. 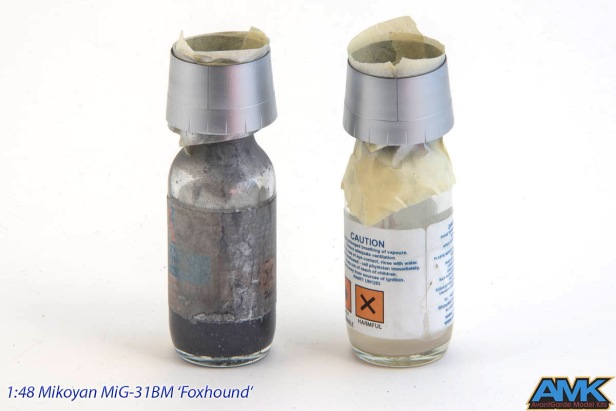 Exhaust cans were first given a coat of Alclad White Aluminum – any other basic Aluminum shade would do.

The parts were then covered by misting of Alclad Exhaust Manifold.

With paint dried, I randomley sanded the cans with fine grit sanding sticks, revealing the Aluminum paint below it.

This was followed by Alclad Pale Burnt Metal, which gives sort of a golden tint to them. 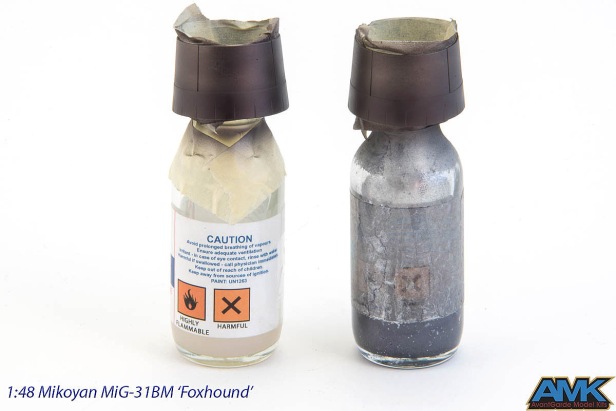 And again, lightly misted with Exhaust Manifold – what we have achieved is random, subtle scruffy looking paintjob of brownish-golden colour as seen on MiG-31 photos.

Exhausts dryfitted to the fuselage – they will be further weathered with oil colours for streaking effects.

BM version is equipped with in-flight refuelling probe, located on the left side of the cockpit. In front of the fairing, there’s a small triangular window, housing the reflector light for night aerial refuellings. I have painted the area in Flat Black and inserted a small “jewel” – half-spherical clear plastic part for jewelry making and decorations, I once found in one of the art-stores and thought once might come in helpful.

MiG-31’s Weapons System Operator (WSO) has the ability to darken his workspace in the form of curtains. There’s a set on the canopy, which I’ll build later, and the set on the side windows in front of his instrument panel. Using a thin steel wire, I first created the bows that hold and guide the upwards closing curtains. 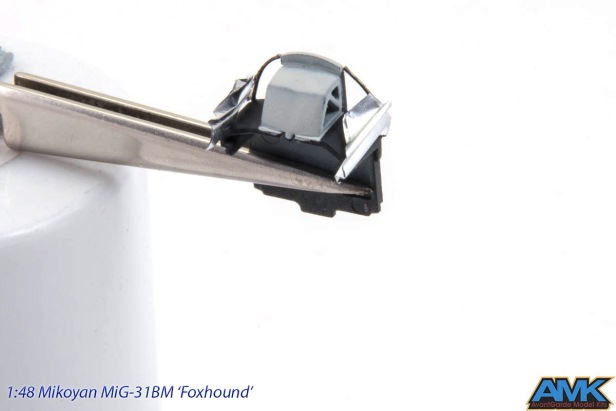 Curtains themselves were built out of kitchen aluminum foil, cut to the shape of side windows, then folded down, as seen in reference photos.

They were later painted in Flat Black and drybrushed with Grey to accenuate the highlights. 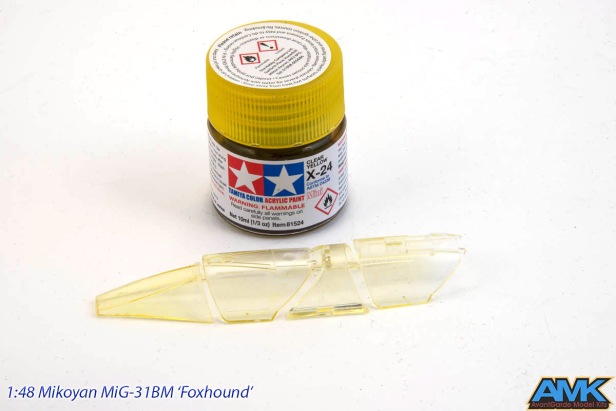 Using thinned Tamiya Clear Yellow I’ve sprayed the inner sides of the clear parts in hope to achieve the tinted effect seen on photos. The effect at the moment is exagarated as the corners and edges seem to intensify the effect.

And last but not least. the overall view of the build so far. Just a few details and some masking to do and I’ll see you next time in the paintbooth!