I’ve already shown you photos of the finished cockpit. However, since I finished it first, I’ve come to realization that some things aren’t exactly as I’ve depicted them, so it was time to fix them. One of them was the color of the cockpit floor – reference shots I used, showed it dark grey but only later I’ve discovered, they were of a simulator pit, while true cockpits have an overall turquoise cockpit. 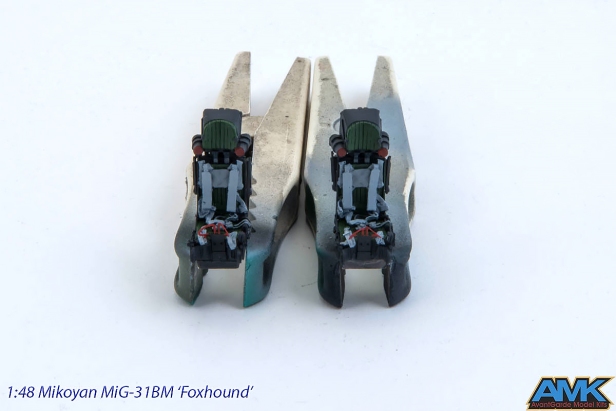 I’ve decided I am gonna replace kit’s ejection seats for K-36s from NeOmega; I will discuss my decision a little later. Seats were first sprayed in an off black color and the details picked out with different shades of grey. Ejection seats are PE parts from the kit. They are quite thick, but after annealing them (heating the brass over the flame), the material became soft enough for easy bending into a desired shape. Also of notice is the color of seat padding. While most K-36s produced had black fake-leather upholstery, the new version of this famous seat, has green padding. It is believed that Blue bort number MiG-31BMs, which were delivered first, still retain the leather seats, while the Red bort numbers, have this new design. 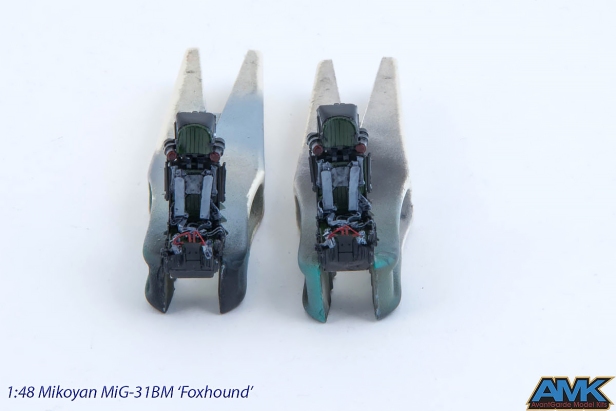 When the paint dried, I put a couple of acrylic gloss coats on the seats and when it cured, I’ve put a dark oil color wash over. Letting it dry a bit, I wiped the excess, which resulted in nice defined edges of the seat belts and other details and subtle shadows in the corners. 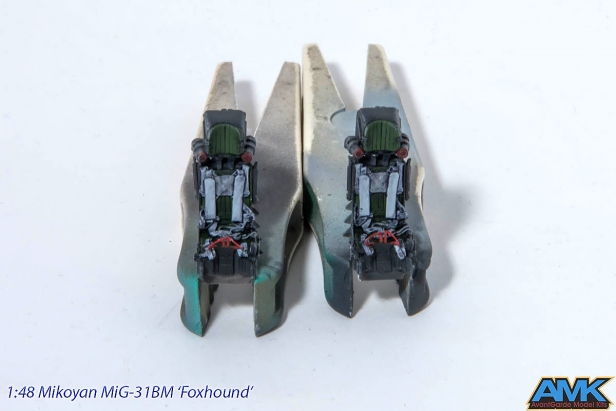 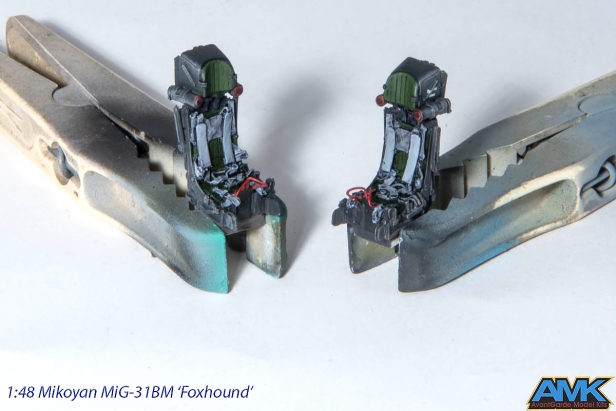 The seats were finished with a flat coat, followed by drybrushing a dark grey paint to highlight raised details. 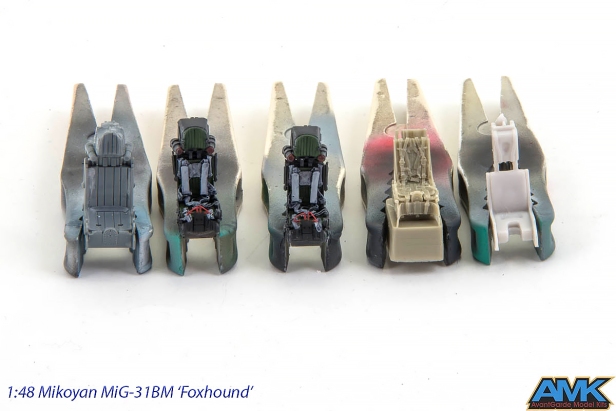 As I got the kit, I was quite convinced, this will be a great build without the need for any aftermarket parts. And most of the time it is indeed. Yeah, the lack of seatbelts on the PE fret was a little disappointing but nothing I couldn’t manage. So I’ve decided to test build one of the included seats. I immediately noticed something odd with the seat – the dimensions just didn’t seem right – either the sitting part was too short, or the entire seat was too wide. When I received my NeOmega replacements, I was shocked by the size difference – the latter being much shorter and narrower. So I’ve dug through my stash and found a resin seat from HPM PAK-FA and an F/A-18 seat just for the size comparison. Here are the dimensional results.

As you can see, all the three other seat dimensions are in the same ballpark, while the kit one is considerably larger. I suspect this leads to other mistakes as well – namely the depth and width of the cockpit. Either that, or all other kit manufacturers before AMK got it wrong 🙂 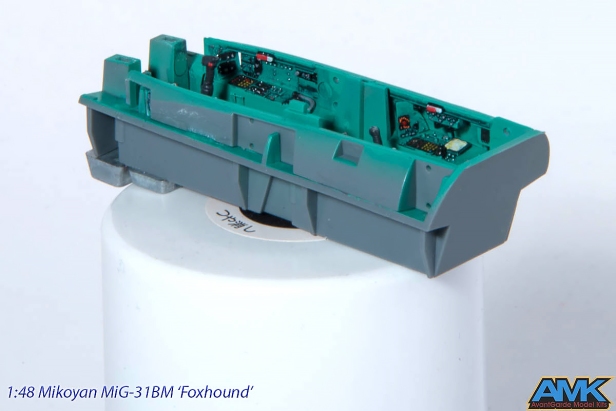 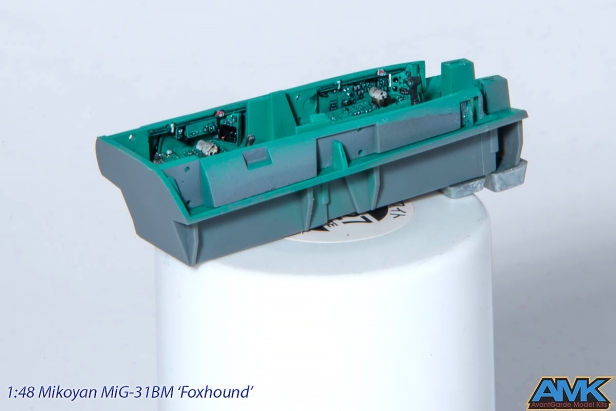 Two low-angle shots of the cockpit showing the side consoles. 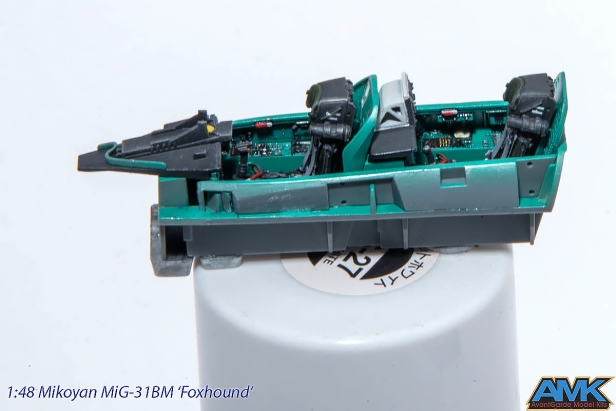 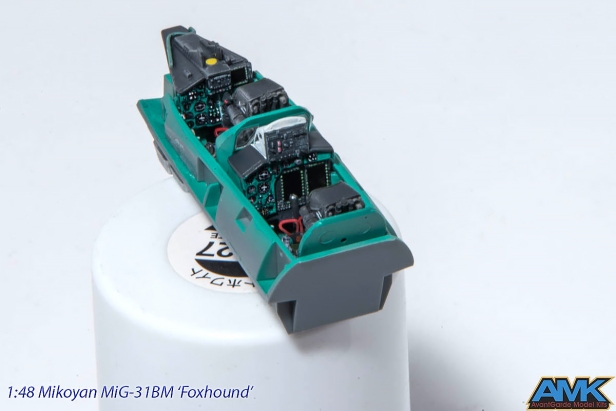 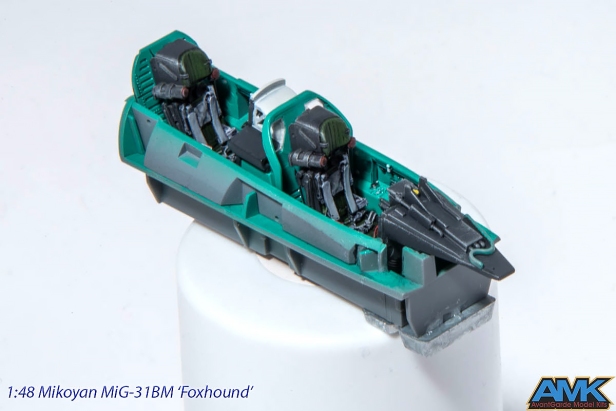 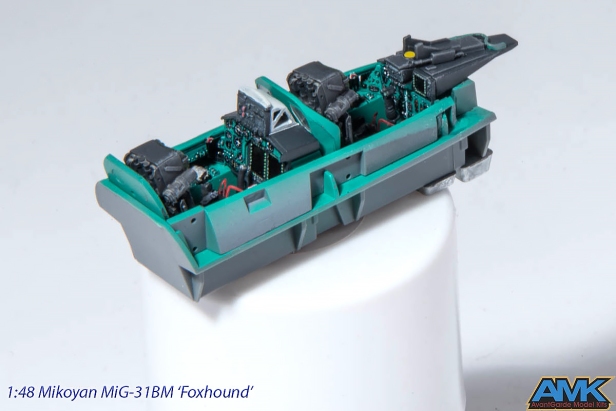 …and a few shots showing the dryfitted cockpit before putting it into the fuselage. 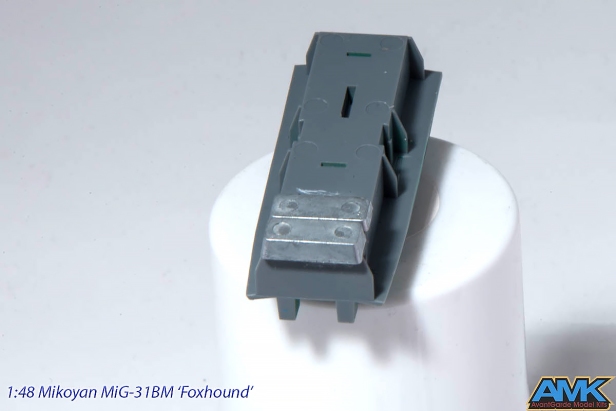 Nice addition to this kit are nose weights – no more calculating the required weight to avoid a tail sitter. 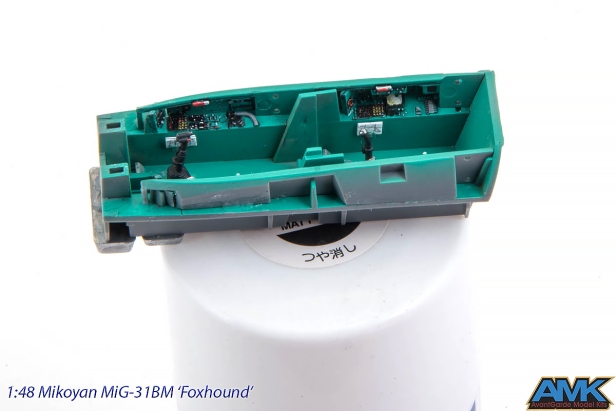 And last but not least, I’ve scratchbuilt another tiny detail – map holders and the maps. I know, it’s not a lot, but a nice addition to the cockpit nevertheless.