Swedish aviation designs have always been one of a kind and looking at the Saab J-35 Draken, 60 years after its maiden flight, the double-delta wing design still makes it look futuristic. As it was such a revolutionary design, Saab decided to build a 70% scale prototype to test the flight characteristics of such design. This was the only time, Saab designed a prototype testbed for any of its aircraft designs. 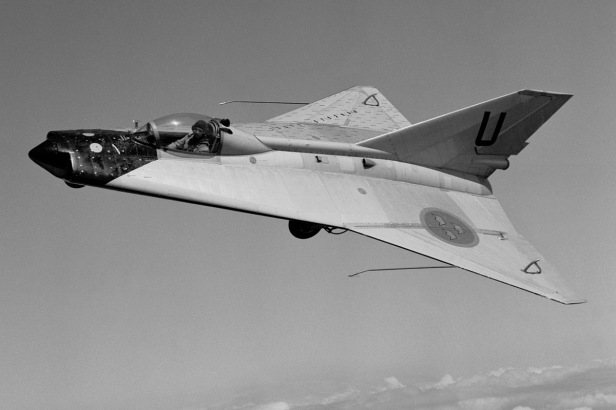 Saab 210 performed its first take-off on 21st January 1952 in the hands of a test pilot Bengt Olow. The main goal was to test the flight characteristics at low speeds. Over the course of four years, the prototype made over 1.000 flights. With the revelation of J-35, the Saab 210 got an unofficial nickname of Lill-Draken (Little Dragon). The intake design was changed during the testing, my model representing the initial configuration. The aircraft can be now seen on display at Air Force museum in Linköping, Sweden.

As this is quite an obscure aviation subject, chances are we will never see it in the injection molded form. But fear not – Planet Models deliver the kit in both Initial and Final configuration. Keep in mind though, that we are talking about a true multimedia kit – landing gear in white metal, canopy in vacform and all the rest in resin, which makes building this little model quite challenging. The resin itself is of great quality – no evident air bubble holes, finely engraved, thin edges. Unfortunately, building it was not as easy. The whole cockpit/front fuselage is too low, which creates quite a big step on the lower side of the fuselage. The same thing goes for the intakes as well. A lot of puttying and sanding had to be done to blend in all the steps. The fit of the intakes on the top also gave me troubles which even resulted in sanding through the top of the nose, followed by a lengthy repair works. Vacform canopy is also quite tricky to attach and lots of trimming was required along with the addition to canopy rail guides that fixed it in place. As for the accuracy goes – I don’t have any plans to compare it to, but according to the few available photos, the canopy appears slightly too long and not as bubbly as on the real thing. The front section from the windshield to the nose might also be slightly too long.

Model was finished with Alclad paints for the metal finish and Mr.Paint for Black and lacquer finishes. 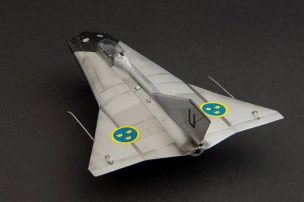