XP-79B is one of the Northrop’s lesser known flying wing designs. Jack Northrop conceived the aircraft in 1942 as a rocket powered fighter, which would destroy enemy aircraft (primarily bombers) by ramming into them. The aircraft featured several advanced solutions – pilot would be flying in prone position to be able to sustain higher G loads, while the airframe would be constructed by welded magnesium instead of usual riveted aluminum, as the volatile rocket fuel would corrode the later too quickly.

To test the radical design, several full scale glider models were built, which started testing in 1944. As the rocket testing turned out to be unsatisfactory, the aircraft was instead equipped with Westinghouse 19-B turbojets.

The first flight of the XP-79B was also its last. After days of taxi runs at Muroc Dry Lake (today’s Edwards AFB), the aircraft finally took off on 12th September 1945. 15 minutes into flight, the aircraft performed a slow roll, uncontrollably pitched nose down and crashed in vertical spin. Test pilot Harry Crosby attempted to bail out, but was hit by the tail and died on impact. As the result of the crash, the second prototype as well as the project were cancelled.

RS Models’ XP-79B is a typical short run kit. While not a multimedia kit, some experience is still needed to achieve best result. The surface of the plastic is not smooth – it actually reminds of a very fine sanding paper – some polishing is required before painting. Instructions call out for the Yellow Zinc Chromate as the interior color, but I guess Interior Green is safer bet. Another wrong color call out is for the exterior paint – RS Models suggest you paint the model white. A few available photos show that the surface was darker (compared to the white on the stars&bars), so I used a light grey, similar to the one used on P-80s. Construction is pretty straightforward and probably the most tricky part of assembly is the two-piece canopy. It was a two piece on the real aircraft as well, but the short run nature of the kit and the complex contour make a perfect fit almost impossible. Some blending in with a water soluble putty was required. Unfortunately due to the rather thick plastic and the curve, due to the light refraction, the join line is too pronounced.

Model was finished with Mr.Paint paints and finishes. 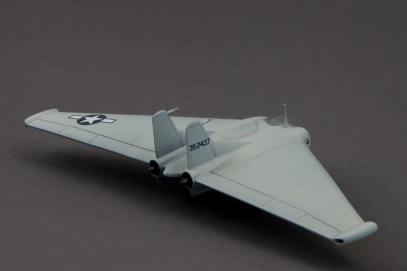 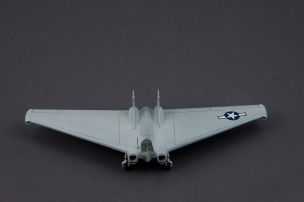 A&A models 1:72 Ilyushin Il-102 - in progress . While the turbine blades look convincing enough, I was less impressed by the intake itself. Composed of two halves, the plastic was too wide to fit around the curvature of the turbine. I ended up shaving away around 1mm of plastic on each mating surface to achieve a fit. However this worsens the seam itself which will have to be carefully puttied and sanded from the inside. A job I am not really looking forward. . . #scalemodelsworld #modelkitsinsta #instahobby #scalefreak #aviationenthusiast #aviationgeek #aviation #aviationart #aviationart #aviationartist #scalemodel #scalemodelling #scaleart #scalemodeller #scalemodellers #plasticart #plasticmodel #plasticmodels #plasticmodelkit #russia #sovietunion #sovietairforce #airforce #aamodels #1_72 #1_72scale #sturmovik #il102 #ilyushin