After almost 4 months of modelling absence (had some pretty good reasons) I’m back! I am happy to say that in the meantime I have achieved Approach Procedural rating in my Air Traffic Controller career and another happy news – a new scale modeller (hopefully) is growing up in my wife’s belly. I am building a new apartment to boot, so yeah, modelling time is a bit sparse, so this build will be a rather slow one, I guess, but what the heck – scale modelling is more of a marathon than a sprint anyway.

The topic of this build will be Russia’s latest fighter, the 5th generation Sukhoi T-50 PAK-FA. I have already built a model of the first prototype a few years back, when Zvezda was the first to release it in plastic form in 1:72 scale. This time, I will be building the fifth prototype. The fifth prototype was the first, not to feature the white/grey geometrical camouflage but instead a rather smart dark grey with feathered edges over light blue, a scheme that soon got the nickname ‘Shark’. Unfortunately in 2013, during one of the test flights, a problem appeared, and the plane caught fire after the pilot successfully landed and exited the stricken aircraft. The fire was extinguished and the aircraft ferried back to the Komsomolsk-on-Amur plant for refurbishment. After extensive repairs and upgrading phase, the aircraft returned to the testing program with designation T-50-5R and a hard-edged dark grey over light blue camo, similar to the airframes 056 and 058. However, it would seem that during the initial flights, some parts of the aircraft were in different colours or unpainted, giving the aircraft an interesting and patchy and surprisingly weathered appearance. 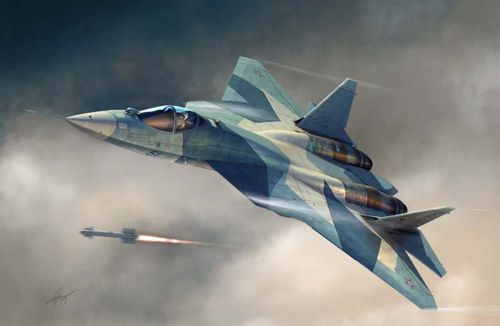 For this build, I will be using HobbyBoss’ “1:72” PAK-FA kit. You may ask yourself why I used quote markings for the scale? Because it is quite a bit bigger than 1:72 really. Compared to Zvezda, it has better shaped nose area and the transition of engine covers into the spine, but it’s still poor in some areas, like jet intakes for example. As the prototypes differ in details between each other, I’ll try to represent the 5R to the best of my abilities and explain the required modifications as we go. 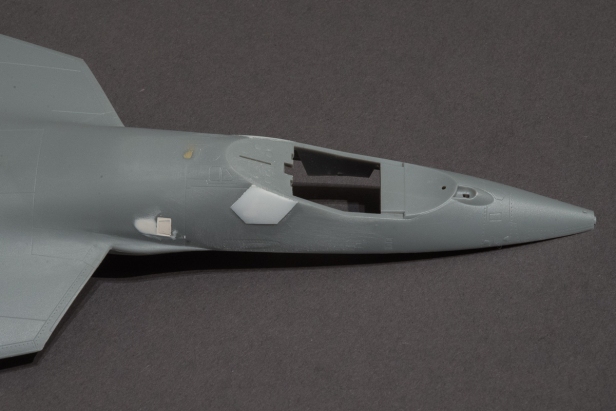 The first thing I did was to fill the vent behind the gun port – 5R uses different kind of venting system, consisting of 3 vents, which will be added later. The second thing was to remove the dome sensor behind the cockpit – it is not there on the photos of the patchy aircraft although it reappears on the repainted one. Third mod is the addition of the panels below the back side of the cockpit. There’s an antenna of some sort installed there on both sides and additional work will go in this area at a later stage. 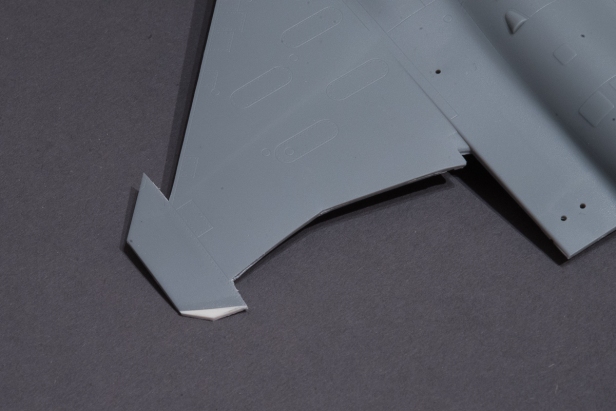 Wingtips from the third prototype on, are slightly enlarged so the inserts were made from sheet styrene. 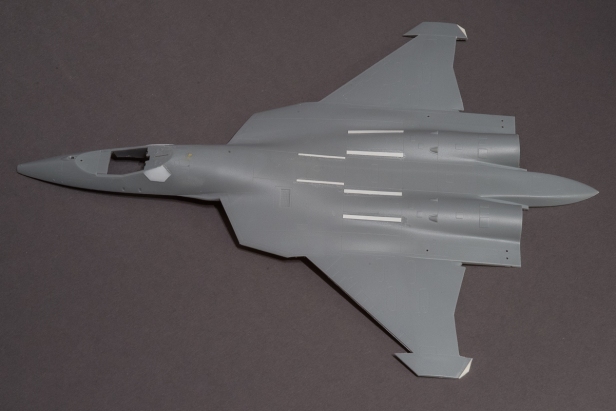 T-50-5R also features a number of strengthening plates on its back and yet again, they were made out of sheet styrene according to the available photos. 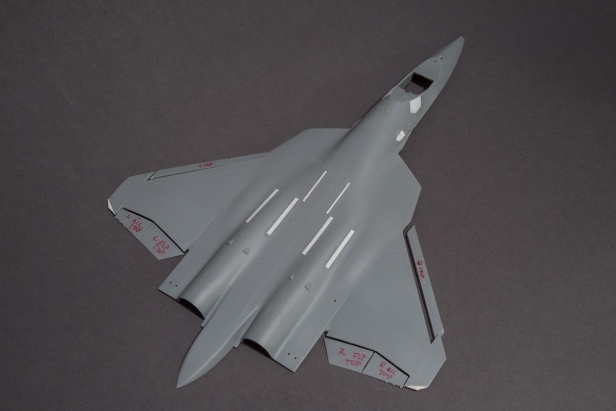 And last but not least – as I will be displaying aircraft parked, all the maneuvering surfaces were cut out as they will be displayed in dropped position.