HMS Aurora was one of the four Arethusa-class light cruisers. Built by Portsmouth Dockyard she was commissioned by Royal Navy on 12th November 1937.
She began her career in Home fleet and started escorting convoys to Scandinavia from September 1939 where she also participated in the hunt of German heavy cruisers Scharnhorst and Gneisenau. Until autumn 1941, she participated in operations in Northern sea where she sunk several German ships and also participated on the hunt for battleship Bismarck.

Late in 1941, she was transferred to Mediterranean and with 3 other ships destroyed the Axis Beta Convoy in which Italian destroyer Fulmine, transports Maria, Sagitta, Rina Corrado, Conte di Misurata and Minatitlan and German transports Duisburg and San Marco were sunk, while Italian destroyers Grecale and Euro were damaged.
HMS Aurora, as a part of Force K, was very active in the Med towards the end of 1941 but was heavily damaged in a mine field off Tripoli, Libya and had to retire to Malta.

After returning to Mediterranean as a part of Force H later in 1942, she participated in Allied landings in North Africa – Operation Torch and attacked two Vichy French destroyers Tramontane and Tornade, sinking the latter and heavily damaged the former and the same fate was waiting for destroyer Epervier.

In 1943 she participated in support of invasion of Sicily and with Salerno landings – Operation Avalanche and moved to Aegean in October 1943. On 30th October off the island of Leros, she was attacked by German Ju-87 and Ju-88 bombers and was hit by a 500kg bomb behind the after funnel; explosion and fire killing 47 of her crew. She returned back to service in April 1944 and participated in the landings in the South of France, then returned to Aegean to help with liberation of Athens.

HMS Aurora survived the war along with HMS Arethusa, while sister ships HMS Penelope and HMS Galatea were sunk.

After the war, Aurora was sold to Chinese Navy in May 1948 and was renamed Chung King and became the flagship of the Chinese Navy. In 1949 her crew defected to Communists with the ship and was sunk in Taku harbor by the Nationalist aircraft in March 1949. She was later salvaged, stripped of all equipment and served as an accommodation and warehouse ship and was subsequently renamed to Yellow River (Huang He) in 1959. After that she was moved to Shanghai and Tianjin and served until the 1990s when she was finally retired and scrapped. 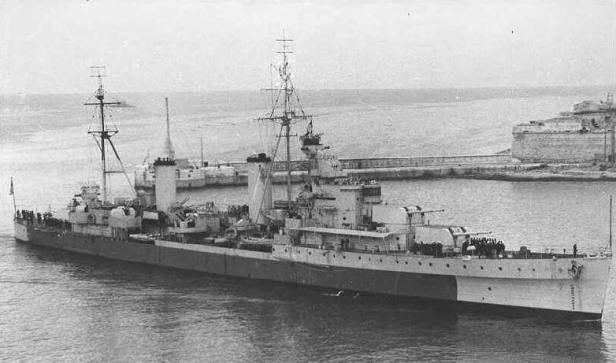 This is my second ship model ever and quite some time has passed since finishing the first one. The story was such that a friend and a fellow modeller Mitja told me, I have to build this model as it is named the same as my daughter. At first I thought that he’s talking about a Russian Imperial Aurora that “started” the October revolution, but after I saw this little Flyhawk kit and reading some reviews, I had to try it.
Besides the kit, I have also bought Flyhawk’s wooden deck and brass barrels. As this was a number of firsts for me, I also decided to put her on a wavy sea surface and try recreating that. Oh and the ship on the sea without any crew looks like a ghost ship and since the photoetched sailors, despite the miniature scale, still look to flat, I had to resort to 3D printed ones from Northstar Models. The latter were Soviet WW2 sailors but in this scale I dare you to point out the differences 😉

Anyhow, about the kit – IT IS FANTASTIC!!! I really have only one negative critique – the instructions! They are all printed on one piece of paper and despite trying to help the modeller with colour coded guides, they’re still confusing at times and making those more detailed and extended wouldn’t impact the cost of the kit at all. The kit itself comes with photo-etched fret for all the details and railings. The fit throught the kit is excellent and no putty was required so more time was spent on painting and weathering as well as planning the progress of the build – a new challenge for me, flyhead, but an extremely enjoyable one! Unfortunately there is no rigging diagram included so I resorted to few photos and artist paintings of Arethusa-class ships I could find. For the rigging I’ve used Uschi van der Rosten’s rigging thread. Water effects were recreated with AK Interactive Water Gel Atlantic Blue and Transparent and foams were created with Water Effects gel.

I have to admit, this model made me a convert – I wanna build more ships! If you wanna try yourself in 1:700 ships, try one of the Flyhawk’s models – you won’t be disappointed. I am already looking into their HMS Prince of Wales and Bismarck kits.