With the model nicely coated with Alclad Aqua Gloss, first thing I did, was paint the bare metal area around the gun. Su-27 uses a big caliber 30mm GSh-301 – a light weight single barrel gun that is able to destroy aerial targets with just 3-5 hits. It’s location in the side of Leading Edge Root Extension (LERX) means, that the projectile travels very close to the surface of the aircraft for quite a while and to prevent scorching paint, the area is left unpainted. I used Alclad Magnesium as a base colour, followed by Alclad Dark Aluminium for highlighting panels, to break up the monotony.

Looking at the photos of the real aircraft on russianplanes.net (http://russianplanes.net/regs/RF-92211), I noticed that the red paint on the bigger markings faded quite quickly; top wing stars turned to white, while side painted markings got pretty faded as well. Fading as done using some technique as I’ve used on MiG-15bis last year – decals, while still on backing paper, got slightly rubbed with a cotton bud damp with enamel thinner. While Eduard’s decals reacted perfectly, Zvezda’s were a bit more reluctant – bigger markings started tearing up as thinner ate its way through the backing film of decal. I would recommend to try this method beforehand on a decal, you don’t intend to use with the build – better safe than sorry 😉 This was also the reason why I haven’t faded the stencils. I plan to use oil filters and hope they will blend the markings nicely.

Decals themselves are not bad – quite thin and I got just a little bit of silvering which was taken care of using decal softener. Some decals seem a bit out of size – stars on the fins as well as VVS ROSII titles. Instructions are not the best either, especially for this markings scheme – luckily, there’s a lot of photos of this particular bird on the above link to help you out.

Till the next time! 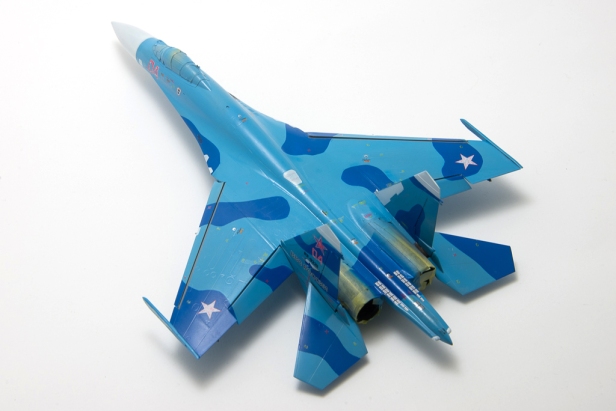